Basic to the teaching of the Ethiopian Orthodox Tewahido church is faith. The church believes that it is impossible to please God without faith. It teaches its followers that the kingdom of God shall be inherited by faith.

The Ethiopian Orthodox church has five pillars of Mystery through which it teaches and demonstrates its basic religious belief. They are called pillars of mystery due to the fact that they support and strength the faithful in religious teaching as a pillar supports a roof. These mysteries have Biblical foundation. (1 Cor. 14:19) Accordingly the five pillars of mystery are expressed in the creed which is the confession of our faith. 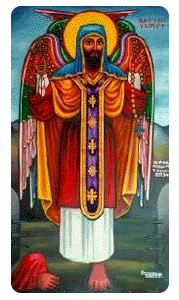 (Tekle Haymanot or Takla Haymanot “Plant of Faith” Saint Takla Haymanot of Ethiopia) (c. 1215 – c. 1313) was an Ethiopian monk who founded a major monastery. He is considered a saint by both the Coptic and Ethiopian Churches. His feast day is August 17, and the 24th day of every month in the Ethiopian calendar is dedicated to Tekle Haymanot.